What’s happened to our flycatchers?

We spent this morning at a farmers’ meeting in a village in Upper West Region, then had a late lunch in Wa – cane-rat stew for my two companions, palm-nut soup for myself – before heading back to Tamale. It was a long journey, much of it on a rough dirt road that’s being upgraded by Chinese contractors. At this time of year the countryside is lush green, the ripening maize head high, the cowpeas and groundnuts ready for harvest.

After a couple of hours we passed some 20 rollers sitting motionless on the telephone wires beside the road. They were evenly spaced, with one every 50 yards or so, and they all faced south, away from the road, as though they were heading towards Ghana’s Atlantic coast. A few minutes later, there was a short, sharp burst of rain and we passed a couple of hundred swifts swooping and scything above a small patch of swampy land. As soon as they’d had their fill of insects, they headed purposefully south. 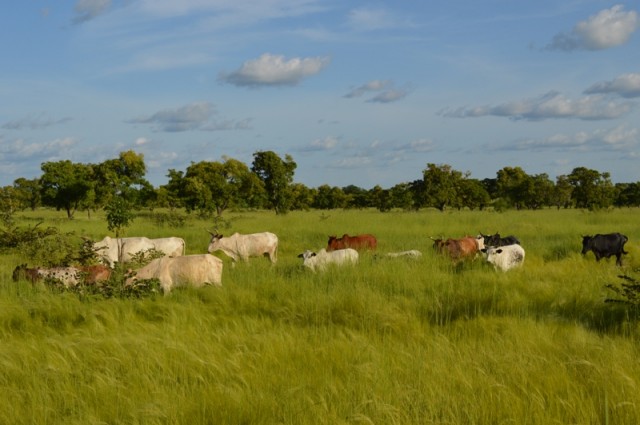 The countryside in northern Ghana during the rainy season

All this set me thinking about the birds which we see every summer in and around our garden in the south of France. The European rollers which nest in the plane trees along the Canal de Midi begin their autumn migration in August; the swifts leave even earlier. The rollers and swifts I saw on the road to Tamale this afternoon had almost certainly come from Europe. They would have headed across the Iberian peninsular before making the long journey across the western flanks of the Sahara.

When we first began spending time in France, just over 10 years ago, it was the more colourful migrants that caught my attention: the rollers with their greeny-blue and russet plumage; the multi-coloured bee-eaters; the pink-feathered hoopoes and the golden orioles – all summer visitors and most near the northern edge of their range. And then, of course, there were – and are – the nightingales which nest in the scrub beneath the white poplars which tower above a deep drainage ditch, some 15 feet deep by 30 feet wide, which runs behind our garden. Retiring and seldom seen, the singing of our nightingales thrills me in a way no other birdsong can.

The drainage ditch – empty except during occasional floods – and the surrounding scrub and gardens also attract a host of other species of modest appearance, which I began to notice once I realised there was more to the birdlife than rollers and orioles. There were tree sparrows and redstarts, little yellow serins which greet the early spring sun with frenetic tree-top twittering, and spotted flycatchers.

The French call spotted flycatchers gobemouche gris– fly swallowers – and the word gobemouche was once used in English as a description for simpletons, for their habit of half-witted gaping. Yet this is one of the loveliest passerines. Admittedly, it is modest in appearance, with its off-white under-plumage and brownish-grey head and wing feathers, and its song sounds like a squeaking door. Its beauty lies in its flight and feeding habits. Spotted flycatchers sit very upright on a branch, tail flicking; then all of a sudden they rise to the air to snatch a flying insect, frequently returning to the same perch in a balletic, circular trajectory.

Since we’ve had our house in Capestang I have kept a diary, recording the birds I’ve seen and heard. In 2008, there were no spotted flycatchers in or around our garden. I thought nothing of it at the time, and presumed I had simply missed seeing them. During the following years, I didn’t see any either. However, this year a pair of spotted flycatchers constructed their nest on the pergola, between the gnarled branch of a vine and one of the wooden struts. The female laid five eggs in May. I was looking forward to seeing the young in June, but the nest had been raided and all that was left were the shattered shells. 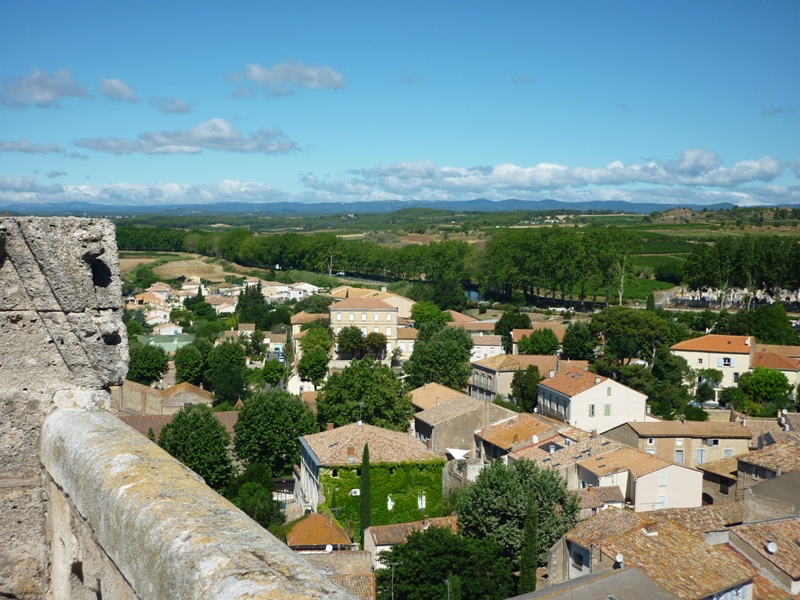 The plane trees along the Canal du Midi, seen here from the bell tower of Capestang church, support a good population of nesting rollers. The planes have recently been ravaged by disease and most will be felled.

Spotted flycatchers declined throughout their breeding grounds in Europe by 59% between 1980 and 2005. They are still far from rare: Birdlife International estimates the breeding population at 14–22 million pairs. I was hoping I might gain an insight into why our flycatchers have become such infrequent visitors when the latest book in Collins’ New Naturalist series, Ian Newton’s Bird Populations, was published last month.

Competition for food, the decline in flying insects, parasites, changing land-use practices, predation, the loss of suitable nesting sites, a decline in fertility – all can have an effect on populations. However, it seems – though there’s a lot of guesswork involved here – that the decline in numbers of spotted flycatchers may have less to do with what’s happening in the birds’ summer breeding grounds than the perils and hardships they face when they make the long journey south to West Africa.

It is a distance of about 3500 miles from where I am now, in Ghana, to the south of France. If you assume that the flycatchers don’t fly in a straight line, and get blown off course from time to time, that means these little balls of muscle, bone and feather, weighing just half an ounce each, could fly 8000 miles or more during their annual migrations. If the spotted flycatchers return to our garden next year, I shall look at them – and other migrants, such as the rollers and swifts – with a renewed sense of admiration and wonder.