“When we arrived in Coverdale in 1983, the in-bye land was like a billiard table and the heather on the moors was rank and scraggy,” explained Stephen Mawle as we watched a pair of grouse and their chicks feeding among the young heather and bilberry. In those days there were over 3000 breeding ewes here and Coverhead Farm was heavily overgrazed.

Over the years, the Mawles have planted broadleaved trees in the gills, reduced the sheep flock to 350 ewes, introduced a herd of hardy cattle during the summer months to improve the sward, and restored large expanses of heather. They have also blocked many of the moorland drains, most of which were dug in the 1960s and 1970s with grant aid.

“A great deal of what we do here is focused on creating a healthy population of grouse,” explained Stephen. “Our aim is to take a sustainable harvest, and to do that we have to get various things right.” A carefully managed grazing regime and rotational burning of the heather ensure there is good cover for grouse and plenty of food at the right times of year. But none of this would make much difference if there was no predator control. 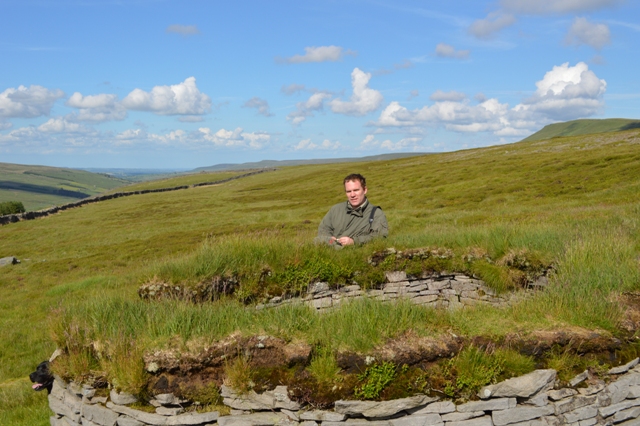 Stephen Mawle with one of the grouse butts. Coverhead Farm is now benefiting from a Higher Level Stewardship agreement with Natural England.

Since the beginning of January, the two gamekeepers employed on Coverhead Farm have shot or snared nine foxes and six feral cats, and trapped over 300 stoats and weasels. They have also done their best to keep on top of the rats, crows and magpies. The Mawles now have an annual harvest of around 1000 brace of grouse. The previous shoot owners, who did little in the way of predator control or heather management, averaged approximately 100 brace on an area two-thirds the size of the current land holding.

It’s about more than grouse

Grouse shooting has come under increasing threat during recent years. Shortly before I visited Coverhead Farm, Mark Avery, former conservation director at the Royal Society for the Protection of Birds (RSPB), launched an e-petition to ban driven grouse shooting. And a group called Ban Bloodsports on Ilkley Moor had recently launched a petition calling on Bradford Council to revoke the shooting licence for the famous moor. Avery’s main complaint is that gamekeepers are persecuting protected birds of prey; the Ilkley group is opposed to all predator control.

I asked Stephen what would happen if grouse shooting was banned, and the moors in Coverdale were no longer keepered? “If there was no grouse shooting, I wouldn’t be able to afford the keepers,” he replied. “And if we didn’t control foxes, mustelids, rats and other predators, there would be a swift decline in ground-nesting birds, not just the grouse,” said Stephen. During the couple of hours we spent wandering round the high country, we were never out of sight or sound of curlews. Coverhead Farm also supports healthy populations of golden plover, lapwing, woodcock and snipe, as well as several pairs of the elusive ring ouzel.

Then there are the raptors. This year, the farm has three pairs of merlins, three pairs of short-eared owls, and half a dozen pairs of kestrels that Stephen knows about. Peregrines regularly hunt here, and recent visitors include eagle owl and osprey. “If we didn’t have a keeper, ground-nesting raptors like the short-eared owls and merlins would soon disappear,” suggested Stephen. Indeed, 78% of the merlins recorded in the UK in surveys conducted by the British Trust for Ornithology (BTO) were found on keepered grouse moors.

Before I met Stephen, I spent the morning in the village of Austwick, on the eastern side of the Pennines, discussing these and other issues with Amanda Anderson and Robert Benson, director and chairman respectively of the Moorland Association, whose members own or manage getting on for one million acres of moorland.

“If driven grouse shooting was banned, we’d end up with more sheep, less biodiversity, fewer upland jobs and more wild fires,” said Robert. Just look, for example, at what happened on Ilkley Moor. There was an 11-year period when the council withdrew shooting rights. The lack of management, including controlled heather burning, increased the risk of wild fires; and sure enough, a wild fire in July 2006 caused huge damage. As a result Bradford Council once again issued a shooting lease and the sporting tenant now employs a gamekeeper. This has benefited not just grouse, but other ground-nesting birds. It has also reduced the risk of wild fires. 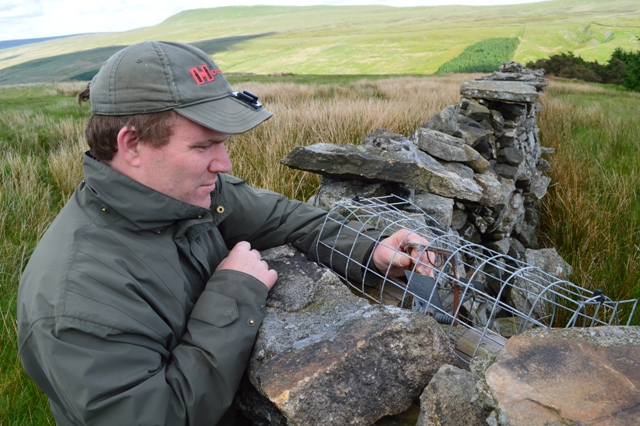 Checking a trap designed for stoats and weasels.

An eight-year experiment conducted by the Game and Wildlife Conservation Trust (GWCT) at Otterburn, Northumberland, found that curlew, lapwing, golden plover, grouse and meadow pipit were more than three times more likely to fledge chicks when there was predator control than when there wasn’t. Other research programmes have found that the numbers of golden plover, curlew, lapwing and redshank are up to five times higher on managed grouse moors than on unkeepered moors.

“The Berwyn study, which we funded, also illustrates the importance of good heather management and predator control,” said Amanda. GWCT scientists analysed the changes in bird populations in the Berwyn Special Protection Area in North Wales, where upland keepering had largely ceased by 1990. Between 1983 in 2002, red grouse declined by 54% and curlew by 79%. The number of golden plover fell from 10 to 1, and lapwing – once one of the commonest breeding waders in the British uplands – had disappeared completely.

Yes, but what about the hen harriers?

In August 2012, the Department for Environment, Food and Rural Affairs (DEFRA) set up the Hen Harrier Sub-Group of the Uplands Stakeholder Forum – its members include Natural England, GWCT, the National Gamekeepers Organisation, the Moorland Association, the National Park Authority and RSPB – to develop a plan to increase the English hen harrier population. The group’s Hen Harrier Joint Recovery Plan includes six elements, including diversionary feeding to reduce predation on grouse chicks, better law enforcement, the reintroduction of hen harriers to other parts of England and brood management . You can read more about it here.

Hen Harriers have a voracious appetite, and one pair with 4–5 eggs must provide some 2000 meals to its chicks before they fledge. Many of the meals are likely to be grouse, if they are readily available. Indeed, when hen harriers were given total protection during the five-year Joint Raptor Study at Langholm, in southern Scotland, their numbers rose from two breeding females to 20, and the grouse population was so reduced that shooting ceased. As a result, the keepers were laid off. Within a short period of time, the number of female hen harriers declined from 20 back to just a few. Why? Because without keepering, hen harriers proved just as susceptible to ground predators – especially foxes – as ground-nesting waders. 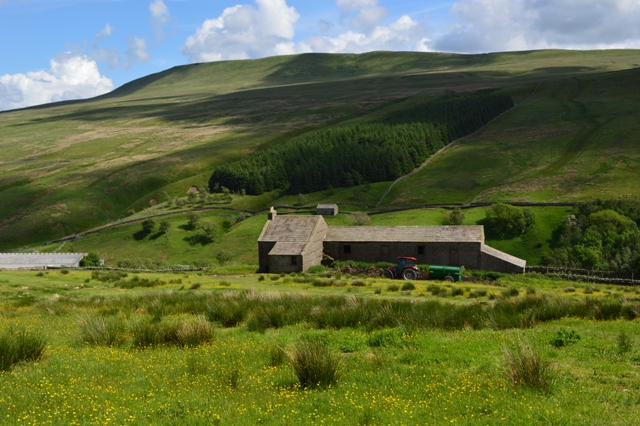 The Mawles have part-funded a scheme to reintroduce black grouse, one of Britain’s rarest upland birds. The fields above the farmhouse have been reseeded with broadleaved herbs to attract the black grouse. Last year six broods reared 24 chicks.

“We want more hen harriers,” says Amanda Anderson. “They are a protected species and we have a duty of care. We are delighted that there are three nests in England this year, two on grouse moors. However, grouse moors can only tolerate a certain number.” The Hen Harrier Joint Recovery Plan recognises this and stipulates a figure of one nest for every 20,000 acres. It’s a plan which Stephen Mawle would be happy to go along with, providing there was effective brood management and colonies were not allowed to form.

Others, including Mark Avery, remain implacably opposed. “Hen Harriers are being persecuted to English extinction whilst grouse moor interests are seeking a negotiated settlement in a DEFRA talking shop,” he writes dismissively on his blog. If he gets his way, and grouse shooting is banned, it will be bad news for curlews, golden plover, lapwing and many other ground-nesting birds; and not necessarily good news for hen harriers either.