Waiting for the migrants

The dawn chorus in Capestang has been a disappointment this week, even though the weather has been unseasonably warm and almost summer-like. At daybreak, little yellow serins twitter feverishly in the upper branches of the ancient black poplar in the ravine at the foot of the garden. Collared doves coo monotonously from the lower branches, and in the thick undergrowth tree sparrows cheep discordantly, like argumentative old ladies. The only musical effort of note comes from a blackbird, but it sings infrequently and with no great enthusiasm.

All this will change in the coming weeks once the migrants arrive from Africa. Then we will get a proper dawn chorus, led by the nightingales which nest in the scrub below the poplar.  In the evenings we’ll be treated to all manner of aerial displays. Thousands of swifts, swallows and house martins will scythe through the insect-filled sky above the plane trees on the Canal du Midi. And a flock of bee-eaters, glinting green and bronze in the sinking sun, will head south towards the marshy étang, presumably in search of food. 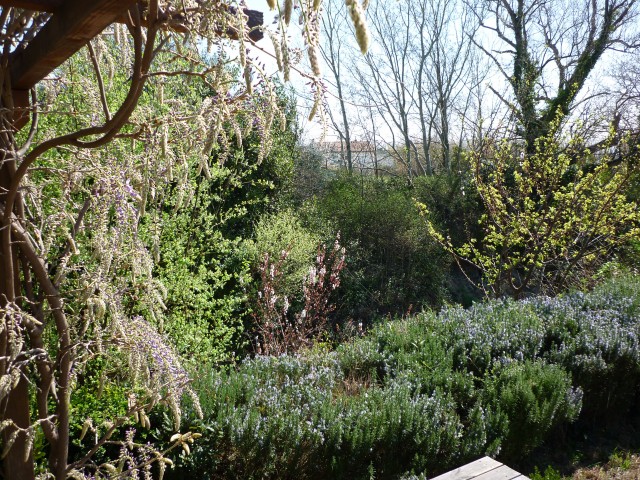 The ravine where nightingales and several other insect-eaters nest.

Of the 38 species of bird which I’ve seen and heard in our garden, or zipping along the ravine beside us, or passing above us, 19 spend their winter in Africa. Even if none sing as beautifully as the nightingale, most have distinctive calls: the prroop-prroop of the bee-eaters, the screech of the swifts, the fluty call of the golden orioles, the poop-poop-poop of the hoopoes.

Many of the migrants are more colourful than the locals, and when it comes to what they eat, they tend to be much fussier. All are insectivorous. The red-backed shrike and hobby also feed on larger fare; lizards and small rodents in the case of the former, swallows and martins in the case of the latter. But they are also voracious devourers of grasshoppers, crickets and large insects. Spotted flycatchers, nightingales, redstarts, bee-eaters and many others survive on a diet of insects and other invertebrates, supplemented by berries in autumn. All these foodstuffs are in short supply during the winter months, and that’s why these species migrate to warmer climates, particularly sub-Saharan Africa. This arduous journey, during which half the birds probably die, is a necessity rather than an indulgence.

When it comes to conserving wildlife, our focus (and that of governments) is primarily on the beautiful, the charismatic and the visible; on birds and mammals in particular, and trees and flowers. We should spend much more time thinking about insects – not just butterflies like the commas and red admirals which are fluttering around the apricot blossom this morning, but the myriad of mites, midges, wasps, gnats, crickets, mosquitoes, greenfly, ladybirds and other insects that provide breakfast, lunch and dinner for so many of our birds and bats. There is nothing particularly original about this observation. Rather it’s a memo to myself: don’t even think of using insecticides in the garden, or herbicides to clear away flowering weeds, such as the plentiful brambles, as I used to in the past.