Tearing the heart out of the Midi

I have talked to half-Amerindian peasants in Brazil whose forests were being felled, mostly against their will, for high-value timber. I have wandered among the smoking ruins of forests in Sumatra, set alight by companies who wanted to plant lucrative oil palm. I have spent time in Cameroon interviewing Baka pygmies about the impact of illegal logging, which was leading not just to the loss of trees and wildlife but the hunter-gatherer way of life.

I studied the destruction, wrote about it, then moved on. My focus was on facts, not feelings; on the extent of forest lost and the numbers of livelihoods blighted, not on the deeper psychological impact of these losses. It is only now, as I watch the plane trees come down along the Canal de Midi, built in the 17th century to link the Atlantic with the Mediterranean, that I have begun to understand that quantifying loss, in terms of the number of trees felled, species affected, jobs threatened, tells only part of the story. 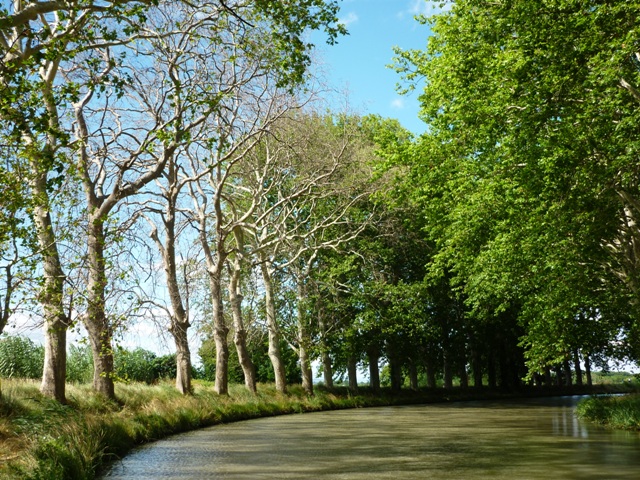 In 2006, staff working for the Voies Navigables de France (VNF) noticed that some of the 42,000 plane trees along the Canal du Midi were suffering from canker stain (Ceratocystis platani), for which there is no cure. Since then the fungal disease has rapidly spread. Over 10,500 trees are now affected – as you travel along the canal you come across regular clumps of their grey, leafless skeletons – and it is only a matter of time before the rest, or most of the rest, succumb to the disease.

Already, some 4000 trees, most of which were planted midway through the 19th century, have been cut down and burnt in pits beside the canal. Last autumn, contractors removed around 20 on a stretch of canal a minute’s walk from the house where we spend a couple of months each year. The leaves in the upper canopy used to rustle in the breeze, a constant reminder, even at night, of their verdant presence. Now they’ve gone.

The next tranche of felling begins on Monday; by mid-November another 2200 plane trees will have been cut down between Castelnaudery, a small town to the east of Toulouse, and the Mediterranean coast. This will go on, year after year, till all the diseased trees have been felled and replaced with disease-resistant planes and species such as lime and white poplar. The entire operation, which will cost €200 million, is expected to take 20 years.

Birds, bats and other matters

VNF seems to be doing its best to limit damage to wildlife caused by tree felling. The contractors can resume work next week as tree-dwelling bats have finished raising their young and the rare European rollers – imagine a jackdaw spray-painted turquoise – which nest in the planes have begun their migration back to Africa. There will be a pause in operations in midwinter, so some five or six species of bat can hibernate in peace; then the felling will begin again in spring. Next year, another 50 or so trees along the canal at Capestang will come down, leaving the town’s northern horizon virtually treeless.

We’ll have to wait until next year before we get the results of a one-year study, launched this January, on the impact the loss of the planes will have on other species. But we can make a rough guess now. Owls, kestrels and golden orioles – this morning I woke to the sound of their fluty calls – nest in the planes. At dusk the sky above is thick with swallows and house martens, scything through the falling lights in search of an insect supper. And at this time of year the bee-eaters which nest in sandbanks north of the canal swoop on their prey above and around the plane trees. I imagine – although one can’t be sure – that these and other species will suffer from the loss of habitat. 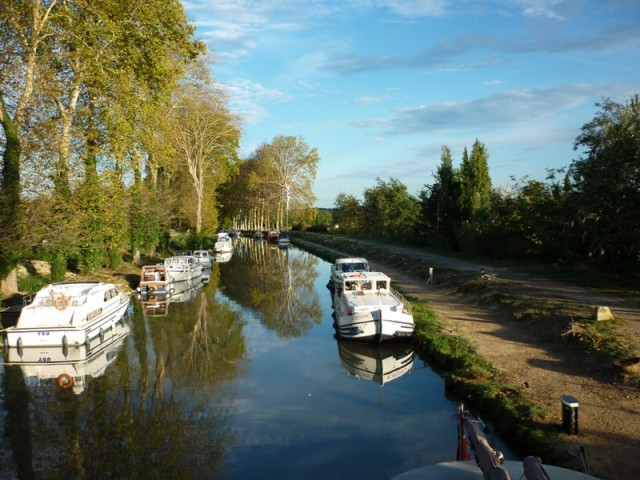 The Canal du Midi at Capestang. The plane trees on the south bank were felled during the winter of 2012/13. The trees on the left will soon be gone too.

And then there’s the economy. Today, it is tourism, not cargo transport, which keeps the canal alive, with 50,000 visitors taking boating holidays each year. But will they come in such numbers once the trees have gone? It is not just a matter of the canal’s natural beauty – the trees were part of the package that encouraged UNESCO to make this a World Heritage Site – but comfort. The planes create a luminous green tunnel during the summer months, providing shade at the hottest times of day. Yesterday, at 3 o’clock in the afternoon, I measured the temperature on the tow path where we lost our planes last year; then again a few minutes’ walk east, where the trees have yet to be touched by the disease (or the chainsaw). It was 40°C in the open; 27°C in the shade.

Among those who live in the area, I have encountered two starkly different responses, between which there is a continuum of views (and perhaps confusion). On the one hand, people say: there’s nothing we can do about the disease, the trees must be cut down, and the canal banks will be replanted. Most planes are of a considerable age and sooner or later they will have to be cut down and replaced. The fungal disease, imported into Europe from the United States during the Second World War in wooden armaments cases, is simply fast-forwarding history.

This was the view I took when I watched the first batch of trees come down near us last year. Why weep, after all, when there’s nothing you can do to change what’s happening? A pragmatic stiff upper lip seems the most sensible response.

But there’s another way of looking at the destruction. “It’s going to rip the heart out of the Midi,” said the proprietor of a restaurant where we ate the other evening. “It’s a catastrophe. All that will be left will be a gash of dirty water slicing through the countryside.” And that’s how I’ve now begun to see it. The whole fabric of the landscape – the canal and its trees, the picturesque villages and towns through which it passes, the surrounding vineyards and olive groves and rocky pine-clad hills – will be changed forever. There’s no point in denying it. 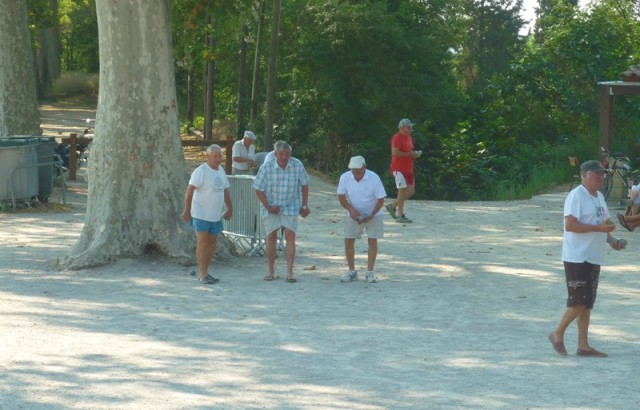 Playing boules beneath the plane trees in Colombiers

Late yesterday afternoon, we walked from the village of Columbiers to the only tunnel through which the canal passes. It was a lovely walk, the tow path shaded by huge plane trees, the evening sun squinting through the mottled trunks to cast sparkling shafts of light across the water. Some 20 men of varying ages and fitness were playing petanque under the planes. Seven men and women and a couple of young boys fished from the banks. By the time we reached the Tunnel de Malpas a dozen boats had passed us going one way or the other. And there were many walkers and cyclists, and an air of peaceful conviviality, with the boaters waving and cyclists and walkers greeting one another. By the time we returned to Colombiers for a beer and a kir, we were suffused with a great sense of well-being and bonhomie.

Will it be like that when the trees have gone? No. Will the men of Columbiers still be playing petanque beside the bridge? Perhaps, but it will be a hotter business. Will there be so many people walking and cycling along the canal, and fishing from its banks? I doubt it. Will there be so many boats at this time of year? Probably not. Will we still go there for an early evening walk? I don’t think so. Quite simply, without the trees, the canal will never be the same again – at least, not in our lifetime. This isn’t something you can measure; you just feel it in your soul.