Towards the end of last year, the Technical Centre for Agricultural and Rural Cooperation (CTA) invited me to attend a forum in Apia, Samoa, which focused on ways to link the food sector to local markets, with the aim of enhancing economic growth and improving food and nutritional security in the Pacific. The forum was attended by politicians, civil servants, chefs, farmers’ representatives, academics and others involved in the food industry. Besides interviewing many of those attending the agribusiness forum, I visited chefs, restaurant owners and farmers on the island of Samoa.

The result was Transforming Food Systems in the Pacific, the fourth booklet in CTA’s Stories from the Field series.  The booklet opens with a message from the Prime Minister of Samoa, the Hon Tuilaepa Aiono Sailele Malielegaoi, and a foreword by the director of CTA, Michael Hailu. Just to give you a taste of what follows, here is a brief excerpt from the introductory chapter. 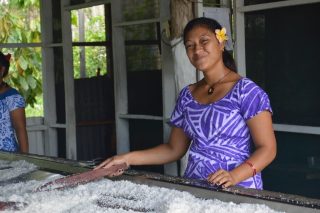 “When I was young, we didn’t have obesity problems like we do now in Tonga,” recalls Sione Teisina Fuko, a retired Member of Parliament and the owner of a seafood restaurant. “We ate fish, fresh fruit and vegetables and the population was much healthier. You couldn’t buy mutton flaps and American chickens and all the other imported food people consume now.”

You will hear a similar story wherever you go in the Pacific. The islands have among the highest obesity rates in the world and recent decades have seen a dramatic increase in type 2 diabetes, heart disease, strokes and other problems related to eating too much of the wrong things. Today, 70% of deaths in Samoa are caused by non-communicable and mostly diet-related diseases.

Fatty turkey tails, chickens raised in intensive industrial units and sugary drinks have replaced fish, tubers and leafy green vegetables as dietary staples for many Pacific islanders, especially in urban areas. As the consumption of cheap, mostly imported, calorie-dense food has risen, home-grown production has declined. If the Pacific islands are to successfully tackle the current health crisis, there is an urgent need to promote healthy food and reduce the import bill by encouraging local production. And if this is to happen, there must be greater collaboration between ministries responsible for health, agriculture and tourism.

Tourism has been one of the few sectors to expand in the Pacific during recent years and it is the mainstay of the economy in several countries. It is estimated that 70% of the food used by the tourist industry in the Pacific is imported. Surveys suggest that instead of eating dishes they are familiar with at home, this being the standard fare in most resorts, many tourists would like to sample more adventurous, Pacific-influenced menus made with local meat, vegetables and fruit.

Creating closer links between tourism and agriculture could do much to reduce the import bill and boost local food production. One of the leading advocates of this approach is chef Robert Oliver, whose books and cookery programmes have helped to popularise Pacific cuisine. “No one should be sick in a region like this,” he says. “The Pacific has an abundance of fish, fresh vegetables and fruit, and by sourcing food from local farmers, we chefs can have a significant influence. Where the cuisine goes, agriculture will follow.” 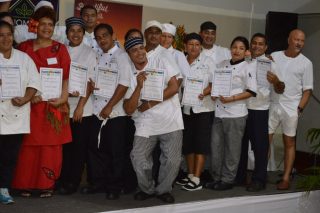 Culinary workshops have provided training
for over 160 Pacific chefs during recent years.

Satisfying the appetites of tourists is not the same as improving the diet of the local population. However, by providing a market for farmers and encouraging greater home-grown production, the tourist industry could help to establish value chains which benefit local communities. Agritourism – linking agribusiness to tourist markets – cannot solve the Pacific health crisis on its own; but it can encourage the production of healthy, home-grown food. The stories told in this booklet describe the beginnings of a movement which could transform the health and welfare of Pacific islanders.

CTA is a joint international institution of the African, Caribbean and Pacific (ACP) Group of States and the European Union (EU). Its headquarters are in Wageningen, the Netherlands. www.cta.int