So what’s the problem?

There is scarcely an acre of Britain which is truly wild. Farming, forestry, hunting, water extraction and urbanisation have all had a profound effect on our flora and fauna. Some of our top predators, such as lynx, wolf and brown bear, have been lost; many other species have been introduced, frequently with disastrous consequences for livestock, crops and indigenous wildlife.

Since the 1960s, the population of red deer in Scotland has increased from 150,000 to around 400,000, and during the last 20 years the number of muntjac deer in England has almost doubled. There are now twice as many magpies as there were in 1970, and the population of overwintering cormorants has risen from 2000 to around 35,000. The number of badgers has probably doubled during the last two decades, and there may now be more badgers in the country than foxes.

These and other dramatic demographic changes have had a significant impact on wildlife, farming and even human safety. Every year, there are 70,000 deer-related vehicle accidents, responsible for 20 human deaths and 1200 injuries, as well as the death of some 10,000 deer. In many parts the British uplands, the survival of ground-nesting birds is threatened by a variety of predators, including foxes, badgers and crows. One study in Northumberland found that when predators were removed there was a threefold increase in golden plover, lapwing and curlew. 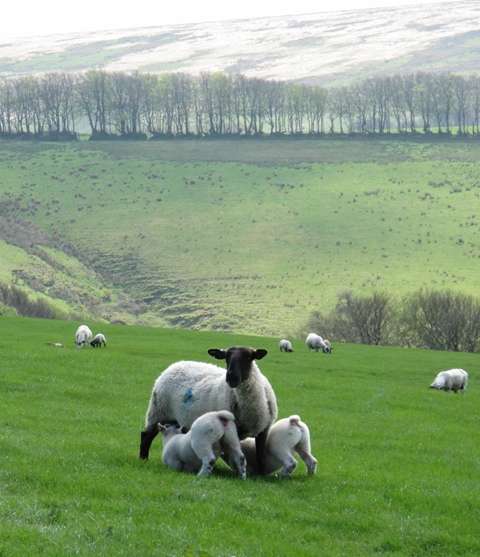 Food for the fox? Spring lambs on Exmoor

In some upland areas, foxes, badgers and ravens are responsible for heavy losses of spring lambs. More troubling for the farming community – and the British taxpayer – is bovine TB, transmitted to cattle by badgers. By the 1980s, bovine TB had been almost eliminated, thanks to a strict programme of badger control. Legal protection subsequently led to a significant rise in badger numbers, and this has led to an increase in bovine TB. Since the 1980s, 300,000 affected cattle have been slaughtered at a cost of £500 million.

Then there are the problems posed by invasive species. It is estimated that 9% of the vertebrates which have UK Biodiversity Action Plans – these include red squirrel, otter, pine marten, water vole and mountain hare – are threatened by non-native species. Among the many natives to have suffered is the red squirrel, whose numbers have been reduced by 50% over the last half century. The grey squirrel, a 19th-century introduction, out-competes red squirrels for food and transmits the squirrel poxvirus, which is lethal to reds. Grey squirrels also cause an estimated £50 million worth of damage to coniferous plantations each year. The overall cost of invasive species to the British economy is estimated at £1.7 billion a year.

Effective management of wildlife means controlling certain species in order that the majority can thrive. However, many of those who determine what happens in the countryside, including politicians and local decision-makers, are afraid to face the facts. Out of ignorance or squeamishness, they cling to the status quo; and for as long as they do, biodiversity will continue to suffer, and so will many farmers. That’s why Brian Fanshawe, James Barrington and Lewis Thomas have asked me to research and write a short book about this contentious – and fascinating – subject.

The Facts of Rural Life will be published by the Veterinary Association for Wildlife Management in Spring 2015. The book will draw heavily on interviews in the field with scientists, farmers, conservationists, vets, gamekeepers and others involved in the study and management of wildlife. To give a flavour of the project I am posting occasional blogs and interviews, together with photographs from field trips. They are filed under ‘The Wildlife Management Project’.