Paradise regained: the return of the grey partridge

In 2002, Dick Potts, one of the world’s leading authorities on grey partridge and farmland ecology, visited the Duke of Norfolk at the estate office in Arundel. “Dick told me that if we didn’t act now, the grey partridge would soon become extinct on the South Downs,” recalls the Duke. “I thought: as a shooting man, and as the owner of part of this area, if I can’t do something, then nobody can.”

In 2003, there were three pairs of grey partridge on the Norfolk Estate, and between them they produced just eight young. Since then, the Peppering Partridge Project – named after one of the four farms involved – has brought about a remarkable change in fortunes. This year, 292 pairs of grey partridge will probably raise around nine chicks each, providing a shootable surplus of some 500 birds in October. 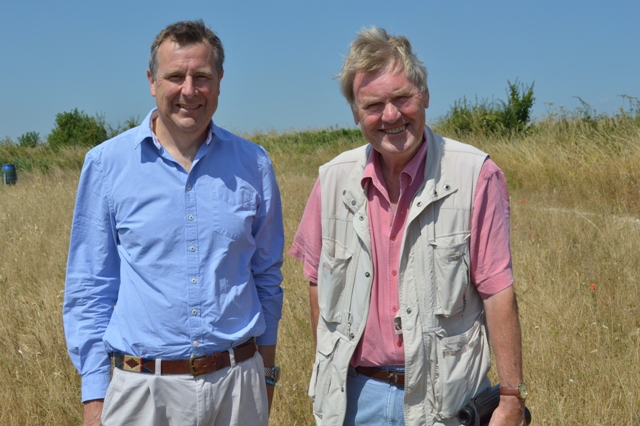 The Duke of Norfolk and Dick Potts at Peppering

However, the project is about much more than partridges. “What we’re trying to do is find a middle way where we can reverse the decline in biodiversity, but still help feed the world and pay the wages,” explains the Duke, before reeling off figures for the dramatic declines of many once common, but now red-listed, farmland birds. Over the past 25 years, grey partridge have declined by around 90% in the UK; lapwing, corn bunting, linnet, skylark and yellowhammer by over 50%.

All these species are now thriving on the 2,600 acres of farmland which comes under the Peppering Partridge Project. The density of corn buntings is 10 times greater here than on other parts of the South Downs. Skylark numbers tripled between 2007 and 2011, and the lapwing population more than doubled during the same period. Indeed, 38 out of the 90 pairs of lapwings in the South Downs National Park nested here this year.

The ingredients of success

The success of the project owes much to the expertise and advice of Dick Potts, who first came to this part of West Sussex in 1968, aged 29, to explore why partridge numbers had been steadily declining since the end of the Second World War. Since his retirement as director of the Game and Wildlife Conservation Trust, Dick has acted as part-time ecologist to the Peppering Partridge Project, frequently getting up at 2.30 a.m. to drive from his Hampshire home to conduct dawn bird counts on the Norfolk Estate.

“The management here is like a three-legged stool,” he explains over a pub lunch at The George in Burpham. “Without any one of the three legs, the stool would collapse.” The key elements of good partridge management are a plentiful supply of insects, good nesting cover and effective predator control.

Modern farming practices have been largely responsible for the dramatic decline in partridge numbers over the past half century. To counter this, the project has replaced intensive prairie-style farming with a traditional system using smaller fields and carefully planned crop rotations. This has created the ideal habitat for grey partridge and many other farmland birds. Around 10% of the area is now devoted to conservation headlands and beetle banks, and these support a rich variety of broadleaved herbs and a profusion of insects on which the partridge feed.

Perfect partridge country: a patchwork of different crops with plenty of hedgerows and conservation headlands

The project has planted over nine miles of hedgerow, most using native species such as hawthorn, blackthorn, spindle and field maple, and this has significantly reduced the average field size. The hedges provide excellent cover for nesting partridges. This is particularly important as there has been a significant increase in the number of raptors during recent years. Eight species currently breed on the Norfolk Estate, including peregrine, hobby, sparrowhawk, barn owl and buzzard. During our walk round the farm we were seldom out of sight of red kites, and there was even a kestrel on the roof of the head gamekeeper’s cottage.

The Duke is quick to acknowledge the importance of a 10-year Higher Level Stewardship (HLS) agreement with Natural England. “We couldn’t manage without it,” he says. “Money from the scheme provides compensation for the income we forego by dedicating land to conservation headlands and other non-productive areas.” The income from wild partridge shooting – the birds are worth £200 a brace – helps to pay the costs of two full-time gamekeepers and one part-time gamekeeper.

The importance of good keepering

We catch up with part-time gamekeeper Andrew Stringer around midday. He is patiently waiting, gun in hand, for rabbits to be driven out of a wheat field by the combine harvesters. He shows us a notebook in which he has made a neat record of the partridges he has seen this morning: 11 coveys, including one with 13 chicks and several others with eight or nine. “If there was no keepering here, the vermin would take over,” he says bluntly.

Dick agrees. “What I’m interested in is having as much biodiversity as possible, and this project is one of the best ways of getting that. No matter how good the habitat, if there was no predator control, the wildlife here would be a pale imitation of what it is.”

Head gamekeeper Charlie Mellor is very much the modern gamekeeper, as happy to talk about biodiversity as he is to discuss predator control. Each year, he and his colleagues map where every pair of partridge has nested, with details of the number of chicks reared by each. By this time of the year they know most coveys individually by sight.

Charlie estimates that at least half his time is spent on the control of foxes, stoats, weasels, rats, crows and other corvids. It’s not just the partridge which benefit, but many other ground-nesting birds. For example, lapwing on the Norfolk Estate produce 2.5 surviving chicks per pair each year, whereas chick survival is just 0.1 per pair in other parts of the South Downs, even on land managed by the RSPB. Without predator control, the lapwing here would be heading for extinction.

But how about raptors, all of which are protected by law? “The only raptors that are really a problem for the partridges are sparrowhawks,” says Charlie. They tend to hammer the birds early in the year when they are pairing off and thinking about sex and territories, rather than watching out for predators. “We accept that we’re going to lose about 40% of the partridges between November and the end of March, either to predators or displacement, and we factor that into our calculations,” he explains.

“Charlie has a hell of a lot of partridges, and a hell of a lot of raptors – so it is possible to have both,” says Dick. “That’s one of the messages to come out of this project.” Some management practices, such as hedge planting, have helped reduce aerial predation. Instead of nesting in the open – which is what partridges used to do when raptors were rigorously controlled – the birds now nest near to or under hedges. The provision of winter feed – there are over 700 seed hoppers dotted around the field margins – means partridges don’t have to spend so much time in the open searching for food. This also helps to reduce predation. 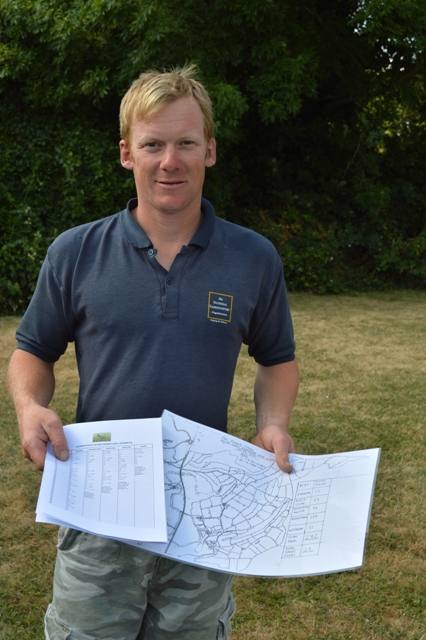 Gamekeeper Charlie Mellor with a map showing the precise location of 292 partridge nests. Ten years ago, there were just two nests in the same area.

“We want to show that this partridge restoration project is sustainable in the long-term, and I believe it is,” says the Duke of Norfolk. Before long, he hopes that there will be “pockets of Pepperings” across the UK. “Just imagine if in addition to the established partridge manors in Norfolk there were 10 projects like this in most of the counties in Southern and Eastern England and some in Scotland as well. Then we would really make a difference to biodiversity revival.”

The government and the European Union have spent a fortune trying to improve farmland biodiversity, but most schemes have failed. This project, founded on a passion for shooting wild partridge, is bucking the trend.

If you want to learn more about grey partridge and the Peppering Project, you should get hold of ‘Partridges’ by GR (Dick) Potts, published by Collins in the New Naturalist series in 2012. Here is a review by Ian Newton.