On the naming of crops

“How many wives do you have?” This, loosely translated, is what Apagbaala means. This is the name that farmers belonging to the Dagomba tribe in northern Ghana have given to a variety of cowpea that produces tremendous crops.  It’s their way of saying that they need many hands – if not many wives – to harvest their cowpeas.

Just contrast this with the names we have given to different varieties of potato. King Edward, Maris Piper, Charlotte, Lady Balfour, Estima, Saxon, Mozart, Vivaldi, Chopin. All good names, but they tell you nothing about the character of the potatoes. And you can say the same for other crops named by the researchers and scientists who developed them. Take, for example, maize and wheat. Names such as Delphi, Chilton, Merit, Country Gentlemen, Incredible, Spicy Treat, Cougar and Revelation give no hint as to whether they mature quickly, resist droughts, produce heavy crops, or cope well with pests and diseases. 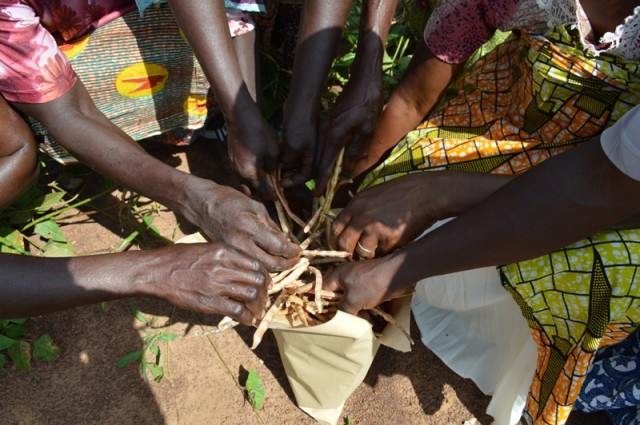 The two women in Ghana’s Upper West Region who told me about the meaning of the cowpea Apagbaala – one said “many wives”, the other “how many wives do you have?” – also spoke highly of a variety of maize called Abontem and a soybean locally known as Zenguma or Zengulma.

Abontem is a Tui word from southern Ghana. Literally translated, it means “does fast”: the maize is early maturing, which means farmers can get it to market and earn some cash before other varieties are ready to harvest. Zenguma means “lie and wait for me”. Its pods don’t immediately shatter when ripe; the seeds stay in their pods, awaiting harvest. Further north, a farmer told me how much he liked a new variety of maize. It is called Obatampa, which means “good mother”. Its cobs are fresh, plump and attractive.

I love these local names. They suggest a people who are in touch with both nature and themselves; who happily view the world, and their crops, through the prism of family and procreation.

This was written following an assignment for the International Livestock Research Institute (ILRI). You can read my blogs about the Africa Research in Sustainable Intensification for the Next Generation (Africa RISING) project here.