I used to think I’d like to have another occupation besides writing. Ideally, it would be farming, perhaps rearing sheep or pigs. But that wouldn’t work, not least because I live in London and spend much of my time travelling. Another possibility would be to find some exotic plant of great potential – for example, as a health food or aphrodisiac – import it to London, and make some serious money. In short: import-export.

Well, the time I recently spent in Iquitos in the Peruvian Amazon, where I’ve been researching stories for the World Agroforestry Centre, has blown that illusion out of the water. One of the stories is about a shrub called camu-camu, which grows on the banks of the Amazon.

Iquitos is a 19th century rubber town some 3000 km up the river, connected only by air or water to the rest of the world. Its market is famous, or infamous, for the trade in endangered species. It’s also a good place to see some of the wild fruits consumed by local people, which is why we were led there at 6 o’clock in the morning by Mario Pinedo, a scientist with the Peruvian Amazon Research Institute (IIAP). There were stalls selling wild pigs and parrots, snake skins and armadillos, eviscerated turtles and a great variety of fish, as well as the indigenous fruits and nuts we’d come to see, such as aguaje, macambo (a relative of cocoa) , peach palm and camu-camu.

Scientists here have spent decades developing improved varieties of camu-camu (Myrciaria dubia) which can be planted on farmers’ fields, and for a while there was a healthy trade with Japan, where it is valued for its health properties. It ought to be a winner: camu-camu contains 30 times as much vitamin C per unit volume as an orange. In an ideal world, it would do as well as açai, an Amazonian palm fruit whose juice is promoted as a source of energy and sold in McDonald’s in Brazil and in supermarkets in Europe.

Açai has long been used by indigenous people, unlike camu-camu, and it became a major success in Brazil when it was featured in a TV soap opera. Unfortunately, there’s been no such publicity for camu-camu. Prices have fluctuated, which has meant that farmers who have planted the shrubs have failed to get the profits they anticipated. Most of the research has focused on agronomic issues – in particular, on developing productive varieties which yield a regular harvest of fruit – but little thought has been given to marketing.

You often hear people saying that there are large numbers of species in tropical forests which have a significant commercial value, in terms of their fruits, timber, resins and so forth, and this is often cited as a compelling reason for conserving the forests. It is true that over 190 different fruits and nuts are consumed by the Indians in the Peruvian Amazon, and no doubt some of these – including camu-camu – have the potential to be commercial successes. But everything depends on creating and sustaining viable markets, and that’s incredibly hard to do. 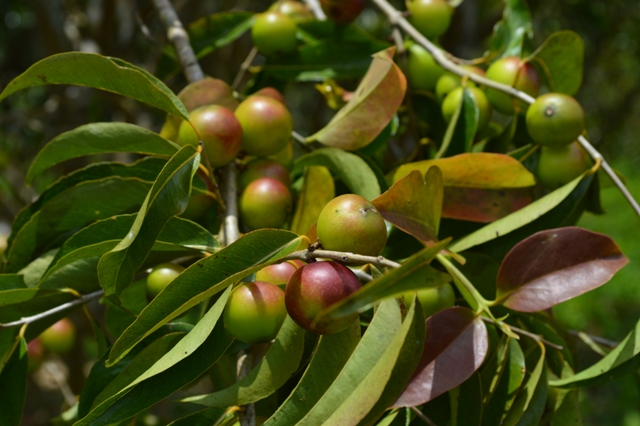 When I got back to London, I visited my local branch of the Health Zone and asked the girl behind the counter whether they sold camu-camu. She had never heard of it. How about Brazilian açai? Yes, she replied, we’ve got all sorts of products with açai in it.

I ended up buying a “vitality mix”, which included powder from ginseng, açai, purple corn and baobab. As I paid, she added that açai wasn’t as popular as it used to be. “You see, everything goes in fads. One year it will be one thing and another year it’ll be something else. Now, baobab is the big thing.”

I find this depressing – not as a trader manqué, but because it suggests that it is going to be difficult to realise the full potential of fruits like camu-camu. Perhaps, as Mario says, the focus should be on developing local markets: camu-camu juice is already popular in and around Iquitos. However, it would also be of great benefit to local farmers if there was a thriving export market. And it would be good for biodiversity too. Agroforestry – growing trees on farms – is vastly preferable to slash-and-burn farming and cattle ranching, both of which are responsible for the destruction of vast areas of Amazonian forest each year.

For more on this story, see page 42 of the 2013 World Agroforestry Centre annual report.