Last week, the Danish government introduced a ban on the religious slaughter of animals. “Animal rights come before religion,” said the Minister for Agriculture and Food, Dan Jørgensen. The ban has upset Jews and Muslims as it proscribes their traditional methods of killing animals. Instead of having their throats slit while fully conscious, Danish livestock must now be stunned before they are killed.

While most animal welfare campaigners welcomed the ban, many pointed out that conditions in Denmark’s factory farms are dismal: vast numbers of animals will continue to suffer before death, if not at the moment of death. The ban and its implications have received widespread coverage in the British press, with many commentators discussing the merits, or otherwise, of secular governments banning religious practices.

I suspect that the vast majority of these writers have never been to an abattoir or witnessed the manner in which livestock die. Neither had I, until a few years ago. 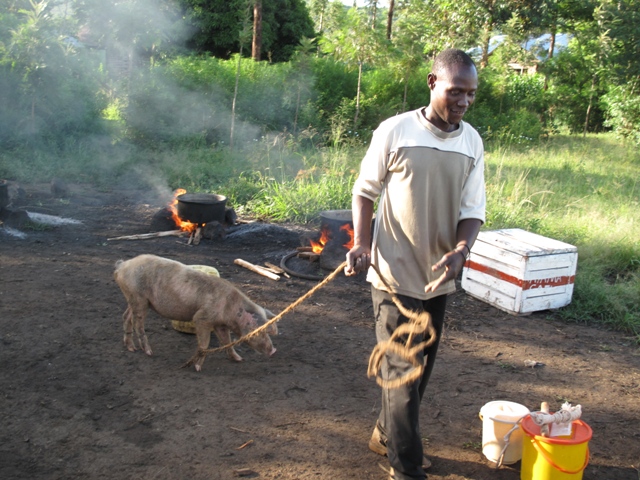 The first pig arrives for slaughter

Early one morning, I accompanied a group of veterinary scientists from Edinburgh University and the International Livestock Research Institute to a small village near Busia, on the Kenya–Uganda border. The vets were studying the prevalence of various zoonotic diseases – human diseases which have a livestock reservoir of infection. One of these is cysticercosis, a parasitic tissue infection caused by pig tapeworm. Contracted by ingesting their eggs in undercooked pork, cysticercosis is a major cause of acquired epilepsy.

Today was market day, which meant that several pigs would be slaughtered to supply the raw material for pork kebabs. The slaughtering site was a simple affair, consisting of a mud-walled enclosure with a concrete floor. We arrived at the same time as the  slaughtering team and we were soon joined by a pig. It was jauntily trotting along beside its owner. Before long, two more pigs arrived, one on foot, the other on the back of a push bike.

After the vets had done their initial research, feeling the pigs’ tongues for tapeworm cysts, the slaughter began. The first pig was led into the enclosure and the rope around its back legs was tied to a wooden stake. One of the men grabbed its front legs and flipped it over. It took around 30 seconds to slice through the pig’s neck with a panga, a long knife. The pig screeched – briefly – then all was silent. The floor was soon awash with blood. The process was repeated for the other two pigs.

I had often been told that pigs can smell blood when they are approaching an abattoir and squeal in anguish. These pigs showed no awareness of their impending fate. In fact, the third pig decided to wander inside the pen and lick the blood on the floor as pig number 2 was being finished off.

The vets explained that scientists have studied levels of cortisol, a chemical which is released during times of stress, during the transportation of pigs from farm to abattoir. Cortisol levels were highest when pigs were loaded onto a transporter at the farm, and when they were unloaded at the abattoir. After they had been at the abattoir for a while, cortisol levels returned to normal. In other words, it is the trauma of transport that causes the greatest stress; not an awareness of death.

The pig killing which I witnessed in Kenya does not qualify as halal slaughter, which requires the slaughterers to obey six rules. Among other things, they must be of faith, pronounce the name of Allah and bleed the carcass dry. The only rule that really matters from the pigs’ point of view is that they use a sharp knife, which these Kenyan slaughterers did.

The Kenyan pigs had spent their life outdoors, living in close proximity to people, cattle, goats and poultry. Contrast this with the life of a pig in Denmark, as revealed by an undercover investigation conducted by Compassion in World Farming.

When intensive livestock units fail to introduce the sort of materials which help to alleviate boredom, such as straw in which to rummage, pigs will bite each others’ tails.  To prevent this, factory farms often practice tail docking.  At each of the 14 Danish farms investigated by Compassion in World Farming, pigs had had their tails cut off, a practice which is illegal under EU law when carried out routinely. Under EU law, pig farmers are also supposed to provide “environmental enrichment”, such as bales of straw. Over two-thirds of the farms investigated by Compassion in World Farming in Denmark had failed to do so.

If I were a pig I would rather be a Kenyan pig, brought up outdoors and swiftly dispatched with a sharp knife when conscious, than a Danish pig. And the recent ban on ritual slaughter would have done nothing to make me change my mind.