I need a drink

We were in some out of the way places during the past few days, and we ate surprisingly well. I hadn’t been expecting much in the way of classy food in Pucallpa, a sprawling town in the Peruvian Amazon largely devoted to logging and other forms of resource exploitation on a tributary of the Amazon. But dinner was a revelation: a beautifully rare piece of tenderloin with a piquant sauce, accompanied by a neat stack of french fries and a pyramid of rice – the sort of presentation you’d see on Masterchef. The following day, in a scruffy establishment outside Iquitos, I ate a strip of spicy smoked pork, succulent inside, charred on the outside, with roasted plantains: perfect in its simplicity and strong flavours.

As we flew into Lima from Iquitos on Friday morning, I was reflecting on the fine eating and drinking I would do over the weekend. Bruno Paino, a scientist who had accompanied me to Iquitos, had even given me a list of his favourite restaurants.

Having been raised on cod-liver oil, haddock and fish pie, and sent to boarding schools which force-fed us ‘the piece of cod that passeth all understanding’, I have developed a lifelong aversion to most forms of fish. But Bruno insisted that we should have ceviche – raw fish marinated in citrus juice – for lunch after we landed in Lima. It was moist, chewy in a delicate sense, and tart. It would have been even better with a glass of wine. No matter, there was the weekend ahead.

On Friday evening I made my way to a restaurant recommended by Bruno. When the waiter brought the menu, I ordered a pisco sour: a cocktail made from brandy, egg whites, syrup and Angostura bitters. He looked astonished. I was clearly one of the few people in Lima who didn’t realise that there was a total ban on the sale of alcohol over the weekend. This, it was hoped, would reduce the chance of violence during the re-run of the mayoral elections. 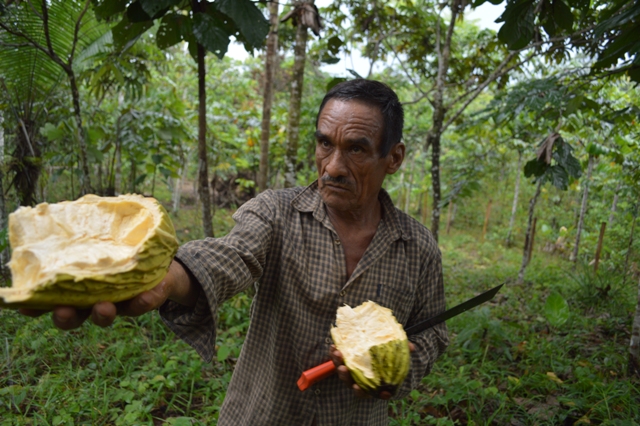 This rather took the edge off my enjoyment, although I did have one particularly fine meal, thanks to a chance meeting with someone I first met many years ago in Indonesia. This morning I was wandering around Miraflores, which is where the smart people hang out, when I heard my name called out. Peter Cronkleton, a scientist with the Center for International Forestry Research, was heading for lunch with his wife and a colleague. He explained that they wanted to try out a recently opened restaurant on Avenida la Paz. If you ever get to Lima, I suggest you do the same. The food at Amaz was – and I use this word in its proper sense – extraordinary.

The chef, Pedro Miguel Schiaffino, sources many of the ingredients used in his restaurants from local producers, and Amaz is a gastronomic celebration of Amazonia. My main course consisted of de-boned chicken thighs roasted in banana leaves in a syrupy sauce made from camu-camu, a small, cherry-like fruit with an exquisite sweet-and-sour tang. It was accompanied by palm hearts in vinegar with chilli and coriander. The desert, which we shared, consisted of a pot of gooey wild cocoa flecked with passion fruit; an ice cream made with the white pulp of cupuaçu, a tree that belongs to the genus Theobroma, which means ‘food of the gods’; and a chocolate soufflé.

All of this was close to perfection. It would have been closer still if it had been accompanied by a decent drink: say, a glass of Chardonnay with the main course; a muscat with the desert. But at least the elections passed off peacefully.