This has been a good spring for Arthur Davies, a sheep farmer in South Wales. He and his family have finally moved into their newly built eco-house on his farm on Manmoel Common, some 1100 feet above sea level, and so far he’s lost just one lamb to foxes.

But it hasn’t always been like that. In 2012, Arthur lost a lamb every night for a month. That year fat lambs were fetching £56 in the local market, so the value of the lambs he lost to foxes – approximate 10% of those born – amounted to around £1700. “That’s the difference between making a profit and loss in this business,” he says, “and it could have been much higher if any of the lambs killed by foxes had been the best ram lambs.”

As we drink tea in the company of two other farmers and David Burles, the master of the Gelligaer Farmers Hunt, a small flock of yearling rams, still in their winter fleeces, graze the steep pasture below the house. Arthur expects them to fetch around £1300 apiece. 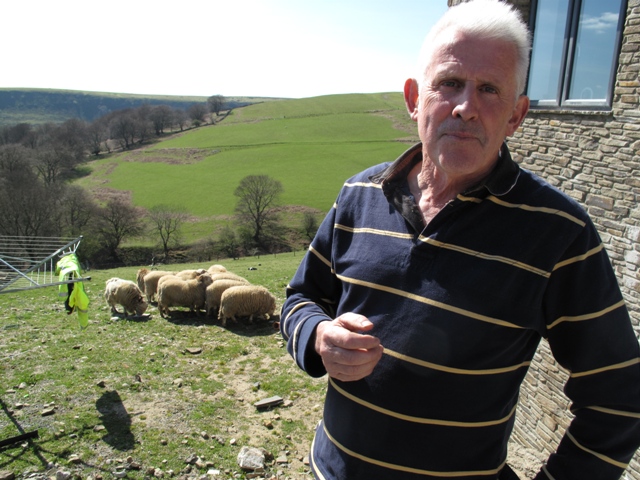 Arthur Davies with his yearling rams

Losing lambs to foxes and other predators is a serious business for these farmers. William Jenkins, who has 275 ewes and 30 Angus cattle, lost 12 lambs to a vixen in just three days in Spring 2012. “It wasn’t just a matter of losing money,” he says. “The trauma was dreadful. I couldn’t sleep. The fox seemed to be just toying with us.” It even took a lamb at 4 o’clock one afternoon. Eventually, William tracked the vixen back to its lair. If he hadn’t killed it, he says, it could have taken another 30 lambs.

Matthew Rawlins, the youngest of the three farmers here, recounts how he once found three foxes attacking a four-month-old lamb in broad daylight. He returned to his house, collected his rifle and shot two of them. It’s not just foxes that worry him, but other predators too. In 2010, he lost 15 or more lambs to ravens, which have become increasingly common in this part of Wales, and last year he lost seven or eight lambs to badgers. “You know it’s badgers by the way they eat the lambs,” he says.

“People don’t seem to understand that we don’t want to exterminate foxes,” says Arthur, “but we do have to control their numbers.”

Since hunting with hounds was banned under the 2004 Hunting Act, the way foxes are controlled has begun to change. “Since the ban, many more people are coming out with rifles, lamping foxes at night,” says David Burles. From a welfare point of view this is a worrying trend, as there are no controls over these activities, and anecdotal evidence suggests that wounding rates are high. In some areas, shooting and lamping has reduced the fox population; in other areas – such as Manmoel Common – the fox population appears to have increased.

According to these farmers, there is no single “best” way of killing foxes. Trapping, shooting and flushing with dogs all have a role to play. To illustrate his point, Arthur tells a story about a rogue fox which was killing his lambs several years ago. At first he thought it might be coming from an old waste site which was in the process of being closed down, so he set up a live trap nearby. “I caught about one fox a week for two months,” he recalls, “but I still carried on losing lambs at the same rate.”

He invited a friend of his, a plumber and a crack shot, to come up at dusk, and although they saw the guilty party – a dog fox – there were houses in the line of fire and it wasn’t safe to shoot. Eventually, Arthur called on the services of the Gelligaer Hunt. Early one morning the huntsman and his hounds tracked the fox from a recent lamb kill. He found the fox and despatched it. “You see,” says Arthur, “hunting with dogs is often the most effective way of targeting the right fox.” 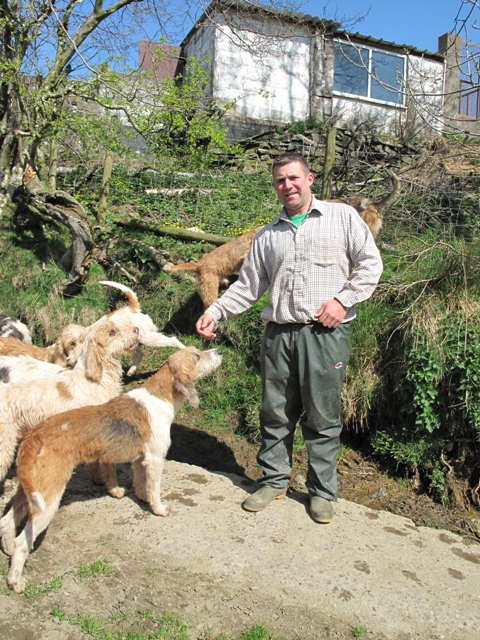 Huntsman Martyn Arnold outside the kennels of the Gelligaer Farmers Hunt

But there’s a problem with this, says David Burles: “Under the Hunting Act, we’re only allowed to flush a fox with two hounds, but you need many more if you’re going to find foxes in a large forested areas, like the ones we have round here.”

Recent research commissioned by the Federation of Welsh Farmers Packs and carried out in Scotland, where hunts can still use a full pack of hounds to flush foxes, found that twice as many foxes were found in forested land using a pack of hounds than were found when using just two hounds. Furthermore, when foxes were found, it took more than twice as long for two hounds to flush them out of cover as it did for a full pack. More about this later.