Farming for food and wildlife

“I enjoy growing good crops, and I enjoy doing my bit for wildlife,” says Richard White as we set off around his 450-acre farm near Tetbury, on the edge of the Cotswolds. The fourth generation of his family to live in the village of Ashley, he has always been keen to encourage wildlife around his crops, and his efforts to do so have been strengthened since he signed a 10-year High Level Stewardship agreement with Natural England.

Most of his fields now have uncultivated margins six metres wide. These have been planted with a flower-rich mix of herbs and they cover approximately 25 acres. Another 20 acres has been sown with annual and perennial herbs which provide food for seed-eating birds, cover for pheasants and partridges, and pollen for bees. Under a scheme supported by the Forestry Commission, Richard has planted over 20,000 trees, mostly beech, ash and cherry. He’s even created skylark plots, little squares of bare land in a field of winter wheat, and a beetle bank – a thin strip of raised ground with vegetation that attracts beetles – to provide food for young partridges and other birds. 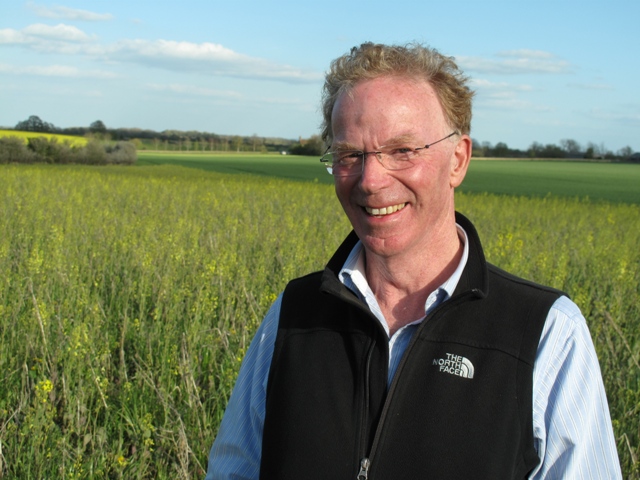 I’ve read about these sort of environmental schemes before, but it’s hard to grasp precisely what they mean until you see them on the ground. It is impossible not to be impressed. Here is a farmer who is growing high-quality crops – there’s not a weed in sight in his fields of winter wheat, winter barley and rape – and at the same time encouraging wildlife. As we wandered round the farm we saw a roe deer, a hare, several flocks of finches, pheasant and partridge. And all the while skylarks trilled in the evening sky.

Not that Richard wouldn’t do some things differently.

“If I was to do this again, I would have my uncultivated, unsprayed areas in the middle or edge of my fields, in larger blocks away from footpaths, not on the margins,” he says. Dog walkers are fond of using these flowery strips, which also act as corridors for predators. All of this is bad news for ground-nesting birds. Walkers and dogs are bound to disturb sitting birds, and badgers and foxes devour both eggs and nestlings.

Despite all the conservation measures he’s taken, Richard says he’s still only got three pairs of partridges on his land. Ground predators are partly to blame, but so are the buzzards. “Twenty years ago, you never saw any buzzards in this part of the Cotswolds,” he says. “Now there are 5 or 6 pairs nesting close by, and I’ve seen them take leverets and partridges.” Legal protection has emboldened the buzzards; they will even follow Richard’s tractor when he’s topping the field margins in the winter, in the hope of pouncing on some rodent or other creature. He reckons that if there were fewer buzzards he’d have more partridges.