When they think of foreign aid, or development assistance, I imagine most people think of money flowing from the wealthy North to the poorer South; from countries like the United Kingdom, the United States, Norway and France to the least developed countries in Africa and the Far East. But there is another story that deserves to be told, about the growing importance of South-South cooperation. This involves countries like China, India, Brazil  and Vietnam providing technical and financial assistance to countries which are less developed, and poorer, than themselves.

In 2013, Festus Akinnifesi, Chief of the South-South Cooperation programme of the UN Food and Agriculture Organization (FAO), asked me to travel to Nigeria to talk to people there about collaboration between Nigeria and China. Under the Nigeria-China South South cooperation programme, which is facilitated by FAO, almost 700 Chinese agricultural experts have been deployed in Nigeria. They have introduced new technologies and exchanged best practices with their Nigerian counterparts in areas such as irrigation, crop production, aquaculture and livestock production. This ten-year programme has brought about significant increases in crop and livestock yields and benefited hundreds of thousands of Nigerian farmers. This booklet tells the story. 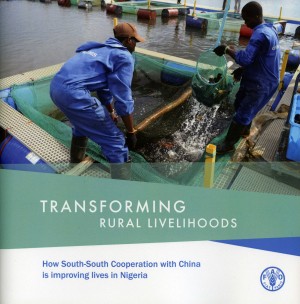