Fox-hunting: Beyond the Propaganda

During a debate in the House of Commons, the Labour MP Kate Hoey held up this booklet and told fellow MPs (much to the astonishment of many on her side of the House) that they should read this before they came to any decision about whether to vote in favour or against a Private Member’s Bill to ban hunting with dogs. Having been raised on a farm in Northern Ireland, she had had first hand experience of the damage foxes can do to livestock.

The booklet was commissioned by Wildlife Network, an organisation set up by Jim Barrington. Jim had recently resigned as director of the League against Cruel Sports, having come to the conclusion that a complete ban on hunting could lead to greater cruelty, rather than less.

Fox Hunting: Beyond the Propaganda looks at the arguments for and against hunting. Wildlife Network exerted no editorial control, and invited me to come to my own conclusions. After talking to people on both sides of the debate I could see that the sort of measures advocated by Jim and his colleagues – including licensed hunting with tighter controls – offered the best way forward.

I wrote a companion to the fox hunting booklet, Hare Hunting: the Forgotten Field Sport, which was published the following year, in 1998. The Hunting Act outlawed hunting with dogs (with a few limited excpetions) in 2005. Its troubled history is explored in a book I wrote for the All-Party Parliamentary Middle Way Group, Rural Rites: Hunting and the Politics of Prejudice. 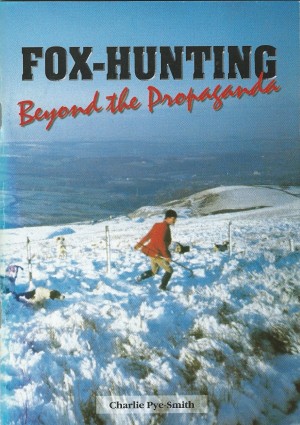