In 2003, the Soil Association invited me to research a booklet about organic farming and animal welfare. They believed that the principles of organic farming ensured that livestock reared under organic conditions lead less stressful lives than livestock produced by non-organic farmers. Now they wanted some hard evidence.

I visited organic farmers producing poultry, pigs, dairy cows, beef cattle and sheep. I also interviewed scientists involved in farm animal welfare. This booklet provides an overview of what I found, and a description of many of the delightful characters I met during my wanderings around the British countryside.

All the organic farmers I encountered cared deeply about the welfare of their livestock. That is not to say that organic farming necessarily makes for better animal welfare – although I believe it sometimes does. Some systems of intensive husbandry are undoubtedly inferior, in welfare terms, to the free-ranging practices promoted by the Soil Association.

However, a great many non-organic farmers in the UK also adopt high welfare standards. That’s why I am happy to buy red meat from Mike Belcher of March House Farm at our local farmers’ market in south-west London.  Mike specialises in Lincoln Red beef, Masham lambs and Gloucester Old Spot pigs, and he has his own butchery on the farm. I like to know the provenance and breed of the meat I eat. 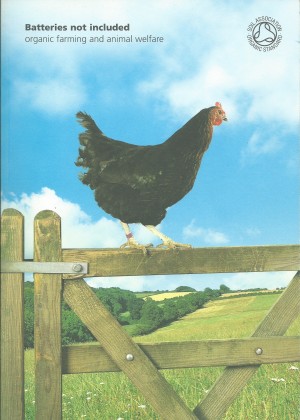