by Charlie Pye-Smith and Grazia Borrini Feyerabend, with Richard Sandbrook. Foreword by HRH the Prince of Wales

When we wrote this book, some 25 years ago, the vast majority of books about the environment were full of gloom and misery. Richard Sandbrook was then the director of the International Institute for Environment and Development (IIED), a London-based think tank. He had been given a small grant by the Ford Foundation to write a sort of environmental memoir: the state of the world according to Richard. But his talent lay in speaking, not writing. He suggested that Grazia and I should pocket the money and write a book about communities which were making conspicuously intelligent use of the resources on which they depended.

The Wealth of Communities tells the stories of 10 communities which were shaping their own destinies, and improving the environment, often in the face of hardship and opposition. On one field trip, to visit forest-dwelling Indians in Costa Rica, Grazia and I were joined by Richard. It was, by some distance, the most enjoyable episode in the writing of this book, for all sorts of reasons which had nothing to do with the story. The book has recently been republished by Routledge with a new preface by Grazia. During the intervening years, pressures on the environment have increased dramatically, but I think the stories told here are as relevant as ever. As the publishers put it: “The Wealth of Communities is a book about hope and ingenuity, written in a vivid and memorable style to which the accompanying photographs lend immediacy and depth. In an age of climate crisis, these 10 tales will pave the way for the success of future ventures and they are a tonic for hard times.”

Richard died in 2005 and he is still greatly missed. Here is his obituary in the Independent. Prince Charles, who wrote the foreword, is still very much alive and campaigning on green issues more urgently than ever. 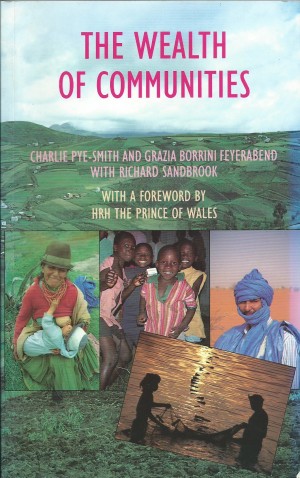