In the autumn of 2002, I spent a week in Washington DC promoting this book – or trying to. Environmental organisations involved with the “Green Scissors” campaign for cutting environmentally-destructive subsidies had been very helpful when I embarked on my journey around North America, searching for stories. Now, they wanted nothing to do with me. One of the few journalists to interview me told me why. “You’ve misunderstood how the US works,” he said. “Here, you’re either with us or against us, and your book is not going to satisfy anybody, because you’re both.”

The Subsidy Scandal, which was commissioned by Lloyd Timberlake of the AVINA Foundation, looked at the way major sectors – farming, transport, mining, energy, water – soak up billions of dollars in subsidies each year. I researched sugar subsidies in Florida, timber subsidies in Alaska, livestock subsidies in Wyoming, fishing subsidies in Newfoundland, oil and gas subsidies in Michigan. I talked to bureaucrats and politicians, loggers and cowboys, industrialists and environmentalists.

I pointed out that resource-users were receiving large quantities of taxpayer money, and using this for destructive purposes. But I also pointed out that while the environmentalists criticised the subsidy-takers in the Republican heartlands, they turned a blind eye to subsidies which benefited Democratic constituents, such as the milk farmers of Wisconsin. According to the journalist, this was why environmentalists ignored the book: it failed to pass the “you’re either with us or against us” test. So the book sank without trace, even though this remains one of the great scandals of our times. 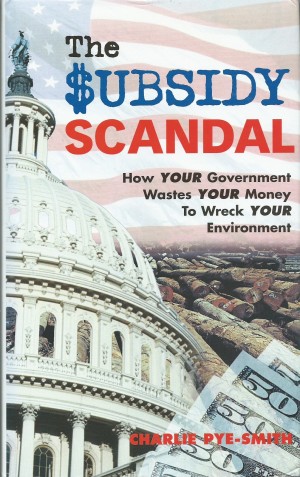