If you arrive in Trinidad after spending time on other Caribbean islands – or, at least, the ones I have been to – the first thing that astonishes is the number of people of Indian origin. The explanation is simple enough: when slavery was outlawed plantation owners had to import a new labour force, the freed blacks being disinclined to work the sort of hours and regimes required by their erstwhile owners. Hence, indentured labour and a vast influx of Indians, whose descendents now make up around 40% of the population. Another 40% are of African descent; most of the rest are mixed, though there is a remnant population of whites.

There is much frank speaking here. This morning, a woman I was interviewing declared – apropos of I forget what – that the Indians “are dreadfully corrupt”. I told her that I have many Indian friends, both in the UK and in India, and none, as far as I know, are remotely corrupt. “I’m not talking about our Indians, our Trinidadian Indians,” she said. “I’m talking about the Indians that come over here from India. You know, Indian business types.”

I was going to let this pass, not least because the morning newspapers were full of reports about match-fixing in the Indian Premier League. Several Indian cricketers and a leading (Pakistani) umpire had been accused of corruption; some were now in custody. So perhaps she had a point. However, I couldn’t resist saying: “But you are Indian!”

She roared with laughter. “I most certainly am not!”

Well, I said, you look Indian to me.

“No,” she said firmly. “Just look at my features.” If I studied them carefully, she said, I would see that she was a composite of Chinese, African, French, Scottish; and, oh, perhaps a bit of Indian.

This evening, I went to a restaurant serving creole food – Venez Manger on Arapati Street, in Port-of-Spain – and I had the best meal I’ve had so far in the Caribbean: chicken grilled with a hot green sauce, served with separate bowls of beans, brown rice and fried plantains, carrots and green beans, washed down with a Stag beer and a couple of glasses of tart white wine. As I was paying the bill, I told the owner of the restaurant, a handsome, colourful woman who chattered like a parrot on amphetamines, how much I’d enjoyed my meal. 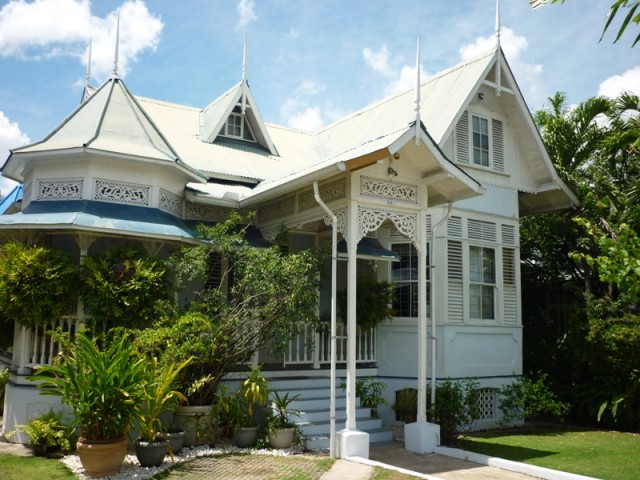 An eclectic marriage of different styles, Port-of-Spain’s colonial architecture is lovely too. I stayed here, at the Gingerbread Guest House on Carlos Street.

“Listen to this gentleman!” she said to those sitting at the bar. Among them were two conspicuously pretty middle-aged women – her sisters – and an elderly white-haired white chap, her brother-in-law, who introduced himself as Peter O’Connor.

“When did you arrive?” I asked, expecting him to say that he came some 30 or 40 years ago, or perhaps as a child. He hadn’t arrived, he said; he’d always been here. This was his country. He was descended from an Irish doctor who had fought at the Battle of Waterloo and was encouraged by the British to make the journey to Trinidad, which they had recently captured from the French. “In two years’ time, we are going to celebrate my family’s bicentennial,” he said.

Peter’s father had met his mother in Patagonia, in southern Chile. She was of Welsh stock. But Peter had married a local woman, with whom he had several children. “They have got the same sort of hair as me, and the same coloured skin, but you can tell there’s other blood there too. They are known as ‘pass for whites’.” He added that this could be taken as either a compliment or as an insult – depending on how it was said. “But I think it’s a lovely expression.”

He threw a glance over his shoulder towards his wife and sister-in-law and said he firmly believed the women here to be among the most beautiful in the world, being a mixture of so many different races, Chinese and Indian, Amerindian and Spanish, French and Welsh.